Extreme weather events that leave city streets under water in no time. Or protracted drought that renders a city’s water supply incapable of meeting its needs. Two extreme cases that become more and more a reality because of climate change, and especially since urbanization is rapidly increasing. In 2050, 87% of the population in developed countries will be living in cities. At about that time, water supply will fall short of demand by 40%. The consequences of climate change leave cities no choice: they are forced to adapt their water cycles because the cost of inaction is very high. But how can a city quickly grasp which elements of it water cycle are already sustainable and which need to be adapted? The City Blueprint is a practical communicative tool that can help cities on their path to be become sustainable water-wise cities.

The City Blueprint® Approach is a diagnosis tool and consists of three complementary frameworks. The main challenges of cities are assessed with the Trends and Pressures Framework (TPF). How cities are managing their water cycle is done with the City Blueprint® Framework (CBF). Where cities can improve their water governance is done with the Governance Capacity Framework (GCF). Two short videos have been made about the City Blueprint Approach. The GCF is a new framework and has been applied in 125 cities, including Amsterdam, Quito (Ecuador), Melbourne, New York City, Seoul, Cape Town, Bandung (Indonesia) and Ahmedabad (India). 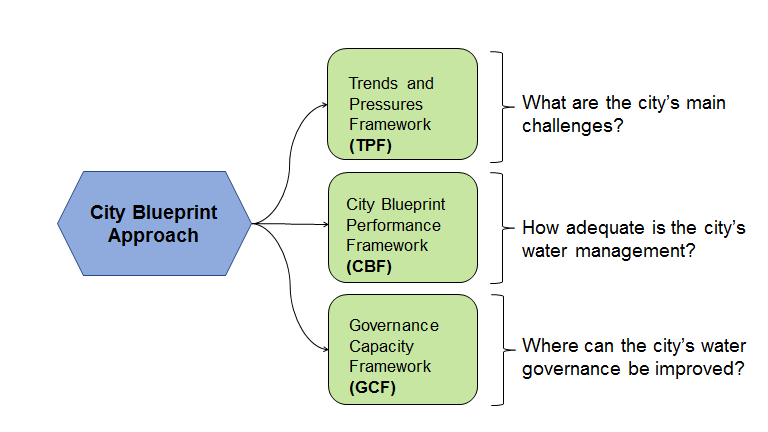 The challenges in cities are the reason why we developed the City Blueprint methodology. We have done this in a learning-by-doing fashion. In 2011 we assessed our first city: Rotterdam. The City Blueprint is a baseline assessment of the sustainability of water management in a municipality (or other dominantly urban region). It allows a city to quickly understand how advanced it is in sustainable water management and to compare its status with other cities. The City Blueprint Approach is part of the Watershare community as well as an action under the European Innovation Partnership on Water (EIP-water). As part of the H2020 BlueSCities project, we will advise the European Commission on the uptake of water and waste in their smart city policy. The activity is also linked to the European Innovation Partnership on Smart Cities. With this approach we have assessed more than 70 municipalities and regions in 40 countries. Publications are available for many cities, i.e. Rotterdam, Dar es Salaam, Hamburg, Istanbul, Ho Chi Minh City, Amsterdam, Melbourne, Quito (Ecuador), Seoul, Cape Town, Bandung (Indonesia) and Ahmedabad (India). Climate adaptation options have been reviewed for e.g. the City of Malmö, Amsterdam, New York, Cape Town and  Sabadell (Spain).

The TPF and CBF

In 2015, we published a critical review of the City Blueprint® methodology. Based on constructive feedback from cities we decided to distinguish a Trends and Pressures Framework (TPF) and the City Blueprint Framework (CBF). The TPF summarizes the main social, environmental and financial aspects on which cities have hardly any influence, whereas the CBF provides a clear overview of Integrated Water Resources Management (IWRM) performance and its bottlenecks in municipalities and regions. The CBF indicators are divided over the following seven categories: water quality, solid waste treatment, basic water services, wastewater treatment, infrastructure, climate robustness and governance.

More about the City Blueprint

Publications about the City Blueprint method in 2015 reported assessments for 45 municipalities and regions in 27 different countries, mainly in Europe. These data were also brought together in the Urban Water Atlas for Europe, a publication together with the European Commission. Since then, many more papers have been published (see Publications below). 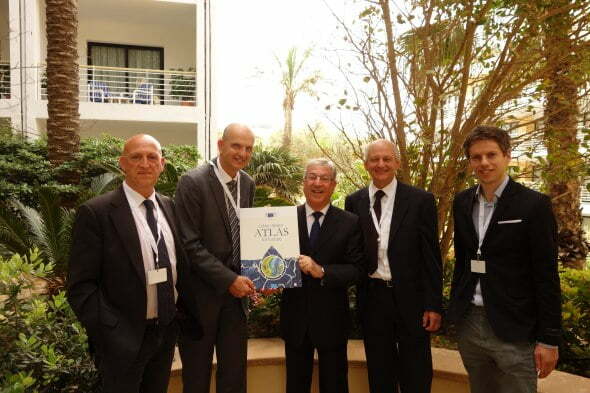 The overall score, the Blue City Index (BCI) is different per city showing the potential gain of city-to-city learning in Europe and beyond. Currently we have assessed more than 70 cities in 40 countries.

The City Blueprint methodology is used for:

The 12 descriptive trends and pressure indicators are scaled from 0 to 4 points, and the following classes have been used: 0-0.5 points (no concern), 0.5-1.5 points (little concern), 1.5-2.5 points (medium concern), 2.5-3.5 points (concern) 3.5-4.0 points (great concern). The overall score, the Trends and Pressures Index (TPI) provides a basic overview of the social, environmental and financial pressures. Data have been gathered and we have applied it again on the 45 municipalities and regions, mainly in Europe. Key results of the analysis of these 45 municipalities and regions are shown below. The financial (red), environmental (green) and social (blue) pressures are shown together with the Blue City Index® (BCI), the geometric mean of the 25 indicators of the City Blueprint. The BCI can vary from 0 (concern) to 10 (no concern). The geographical distribution of the BCI is given as well.

The performance-oriented set of indicators provides a snapshot of the current UWCS performances. The indicator scores of each city are shown in a spider diagram. Furthermore, the Blue City Index® or BCI is the overall score of the 25 indicators which varies from 0 to 10 points. The BCI shows profound differences between cities. Moreover, cities with much pressures (cities that have a high TPI) are cities with low BCI performance scores. These cities have the most serious water challenges. Also within Europe differences in performances are substantial showing the room improvements by exchanging knowledge, experiences and best practices.

According to the OECD, water governance is the set of rules, practices, and processes through which decisions for the management of water resources and services are taken and implemented, and decision-makers are held accountable. Good water governance is the real challenge. The City Blueprint Approach (TPF+CBF+GCF) is just the first step (the baseline assessment) in a long-term journey of communication and co-operation within and between cities. Based on an extensive literature study, we have proposed a Governance Capacity Framework that focuses on 5 water-related challenges: 1) flood risk, 2) water scarcity, 3) urban heat islands, 4) waste water treatment and 5) solid waste treatment. These are amongst the most reoccurring issues that will steadily increase in importance due to global trends of climate change and urbanization. The Governance Capacity Framework has been further developed in a separate Watershare tool.

Participation in the City Blueprint process requires little effort whereas it can produce high returns. It shows the city exactly what steps they want to take towards making Urban Water Cycle Services (UWCS) sustainable. It starts with completing the questionnaire provided in the Toolsheet. This is done by the city and experts from KWR will check the source data and complete them whenever needed. This guarantees an optimal and independent assessment of the baseline situation and allows for a comparison with other cities, providing the city insight into its most important strengths and weaknesses.

We will then work together in defining the right direction and goals for UWCS, show the most rewarding points of improvement and show cities that have already implemented measures to seize these opportunities. Finally, we will also show which Watershare tools can be useful for reaching the city’s own formulated ambitions on their path towards water-wise. In 2015, we revised the City Blueprint to incorporate constructive feedback from cities, to better separate city performances from trends and pressures that can hardly be influenced by local authorities, to include solid waste indicators, and to improve the framework balance by statistically analyzing the results for 45 municipalities and regions.

The City Blueprint process in an interactive approach that involves all stakeholders early on in the process. It is a first step in the strategic understanding and long-term planning of the city’s water management. We provide two separate frameworks:’

The trends and pressure framework provides a wider context to the city’s own unique circumstances that shape everyday urban water management but can hardly be influenced the city. The framework provides supplementary information to the City Blueprint performance framework. The 12 descriptive trends and pressure indicators are equally distrusted over a social, environmental and financial category, based on key information from international organizations. 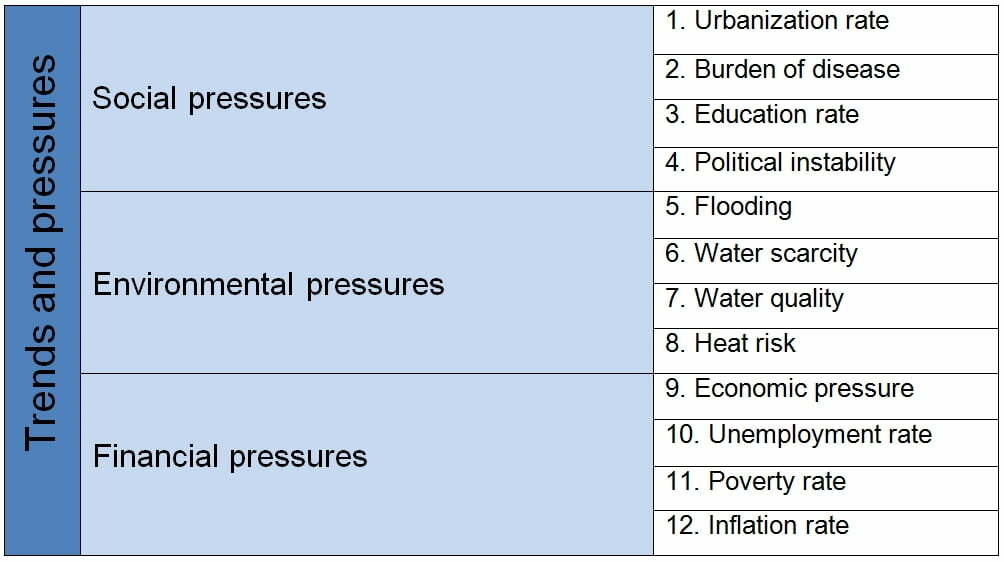 For the City Blueprint baseline assessment the following practical steps are undertaken:

This is done through by filling out a questionnaire:

The information is used to calculate the indicator scores on a scale of 0 (attention needed) to 10 (no further attention needed). Moreover, the degree of concern score of the trends and pressures framework is calculated.

The city’s results are set in a context, by drawing on literature references from the City Blueprint, other cities’ assessments and explanations.

After the independent baseline assessment, the city can be compared with other cities, providing valuable insights and exchange of knowledge and experiences. We will then work together in defining the right direction for your UWCS. Finally, the City Blueprint is an essential first step in showing which Watershare tools are useful for reaching the city’s own formulated ambitions. These are the supporting steps towards water-wise cities that the city Blueprint baseline assessment can provide. 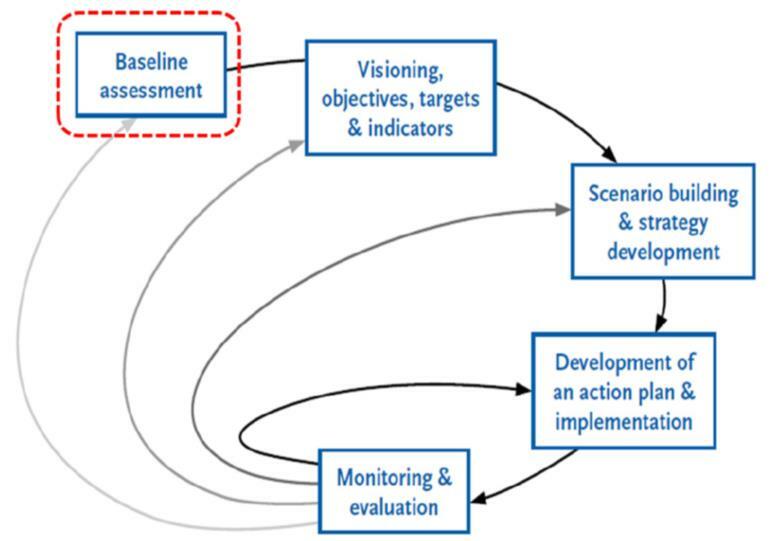 There are several forms of support available to ensure that you optimize your use of the City Blueprint, and that you are updated on all the latest developments. Specifically, you can make use of the following options to suit your particular situation: 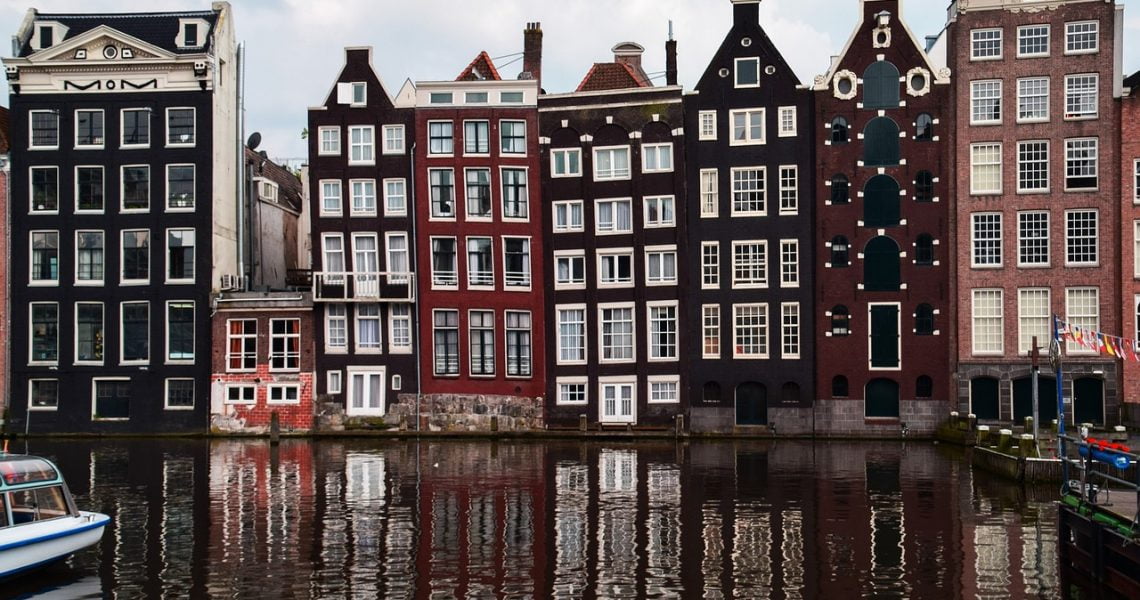 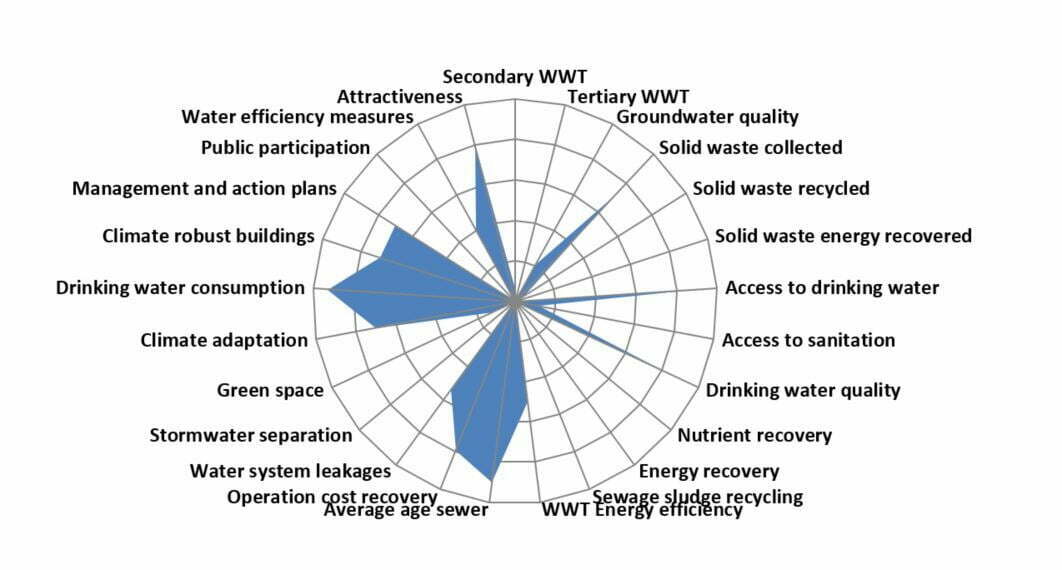 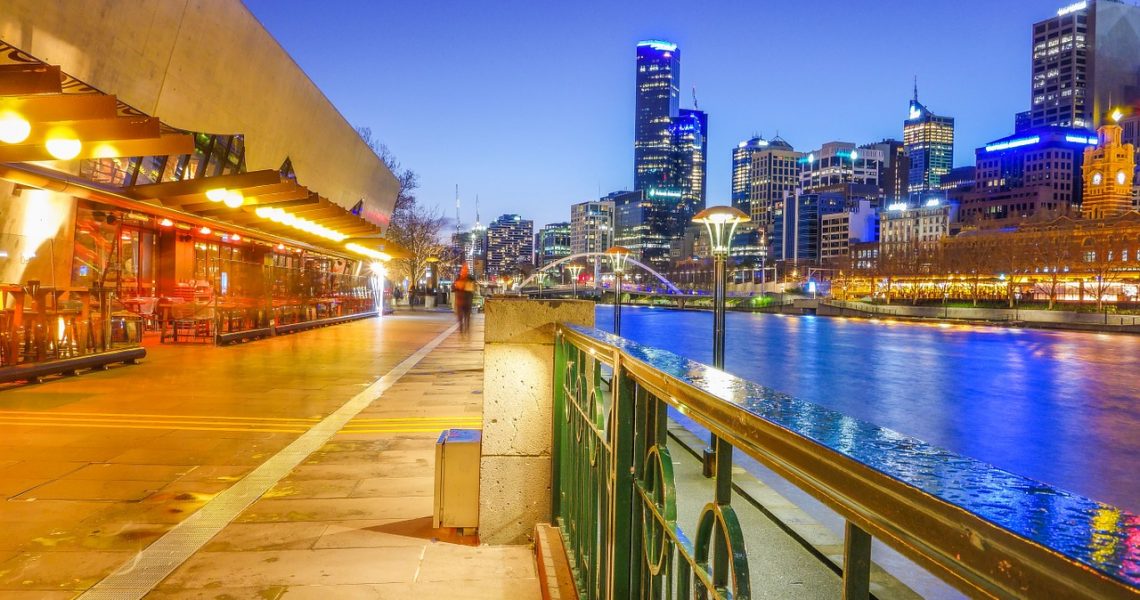 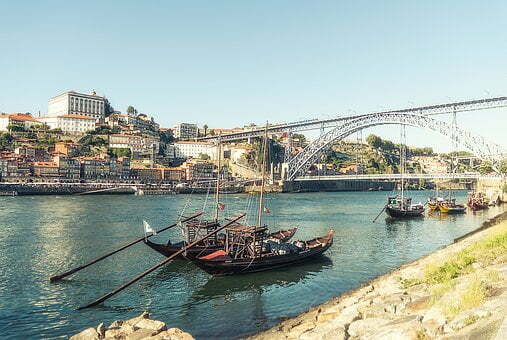 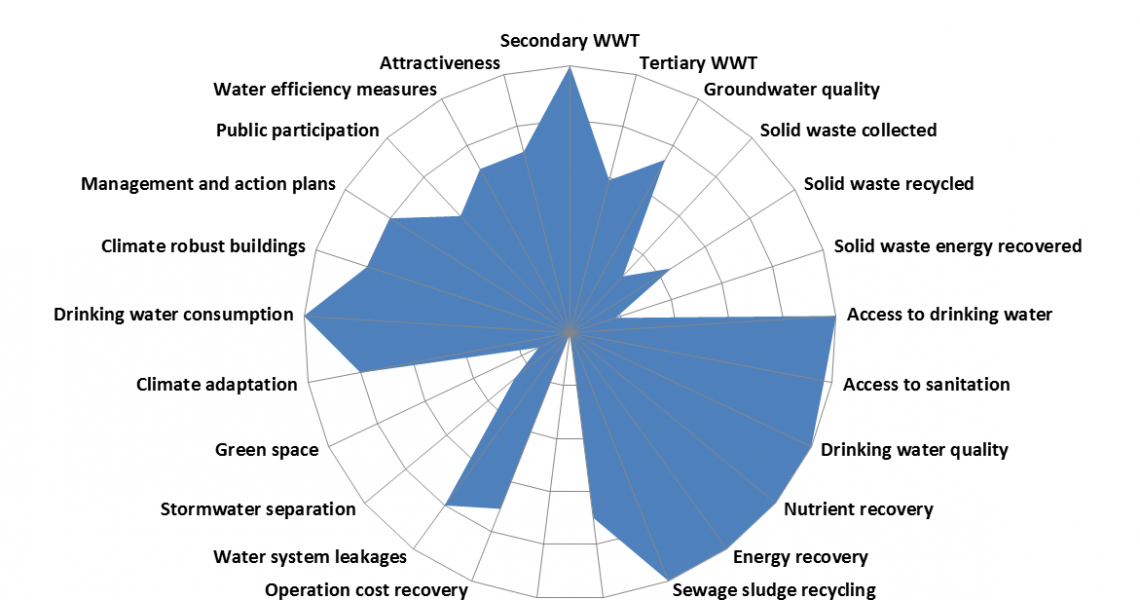